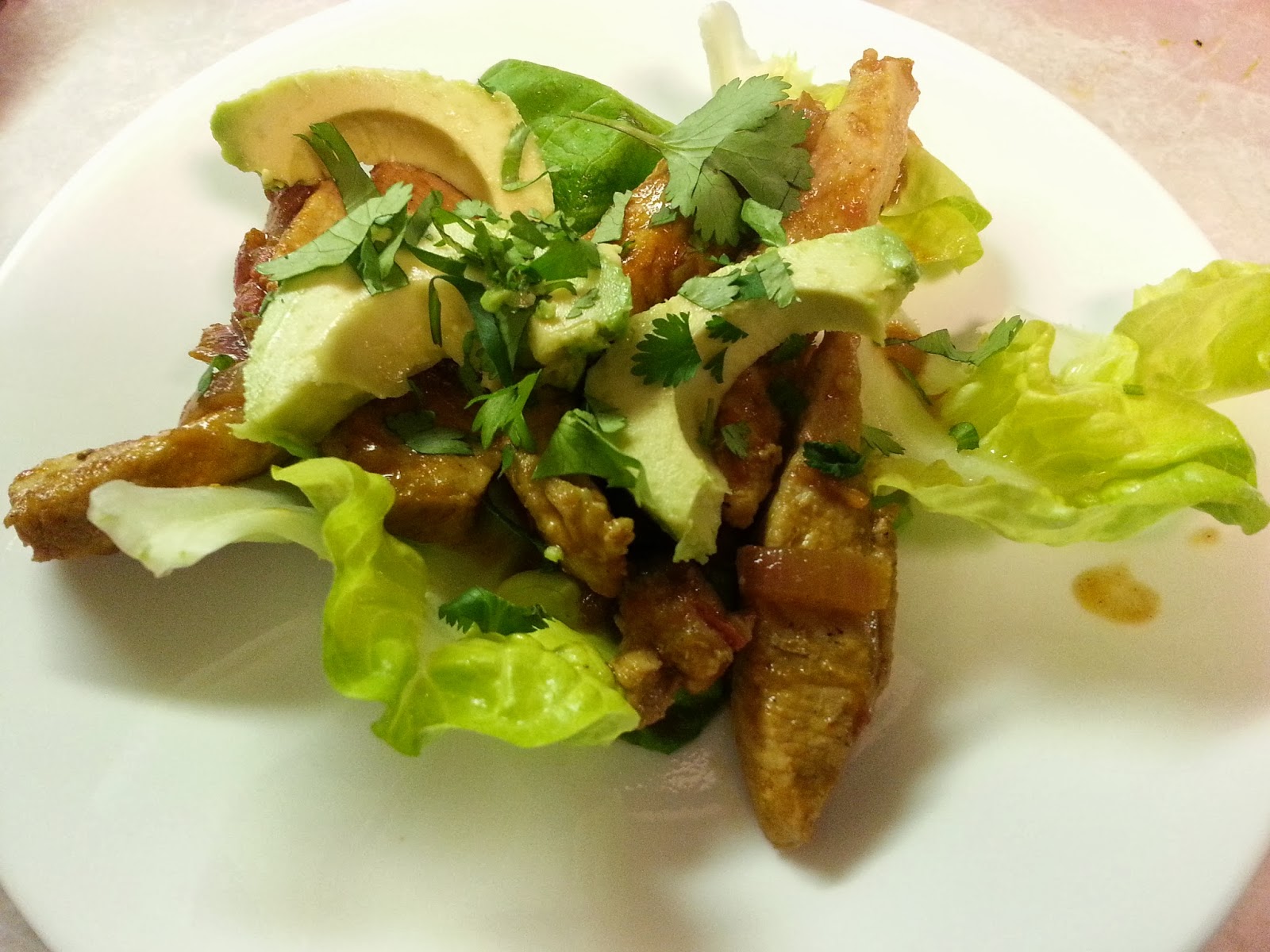 Is there anything better than the smell of fresh chopped cilantro? Maybe fresh cilantro mixed with lime! This dinner was stacked to be full of flavor. Pork tenderloin cooked in palm oil, then sauteed with an onion, tomato, chicken stock mixture.

Tonight's adventure had a new ingredient in it. I found red palm oil in a local store and decided to give it a go in place of coconut oil. Well, that's all good and dandy, but it looks like I've found a new allergy. I am covered in hives. I've had minor reactions before to things with palm oil, but I just marked it up to being an item that was "packaged in a facility with tree nuts" or it also had coconut in it. Guess I was wrong. I have to say, I'm extremely bummed about this because I was looking for a substitute to coconut oil to use for frostings and in cooking, and now I have to keep looking. BOO!!!! 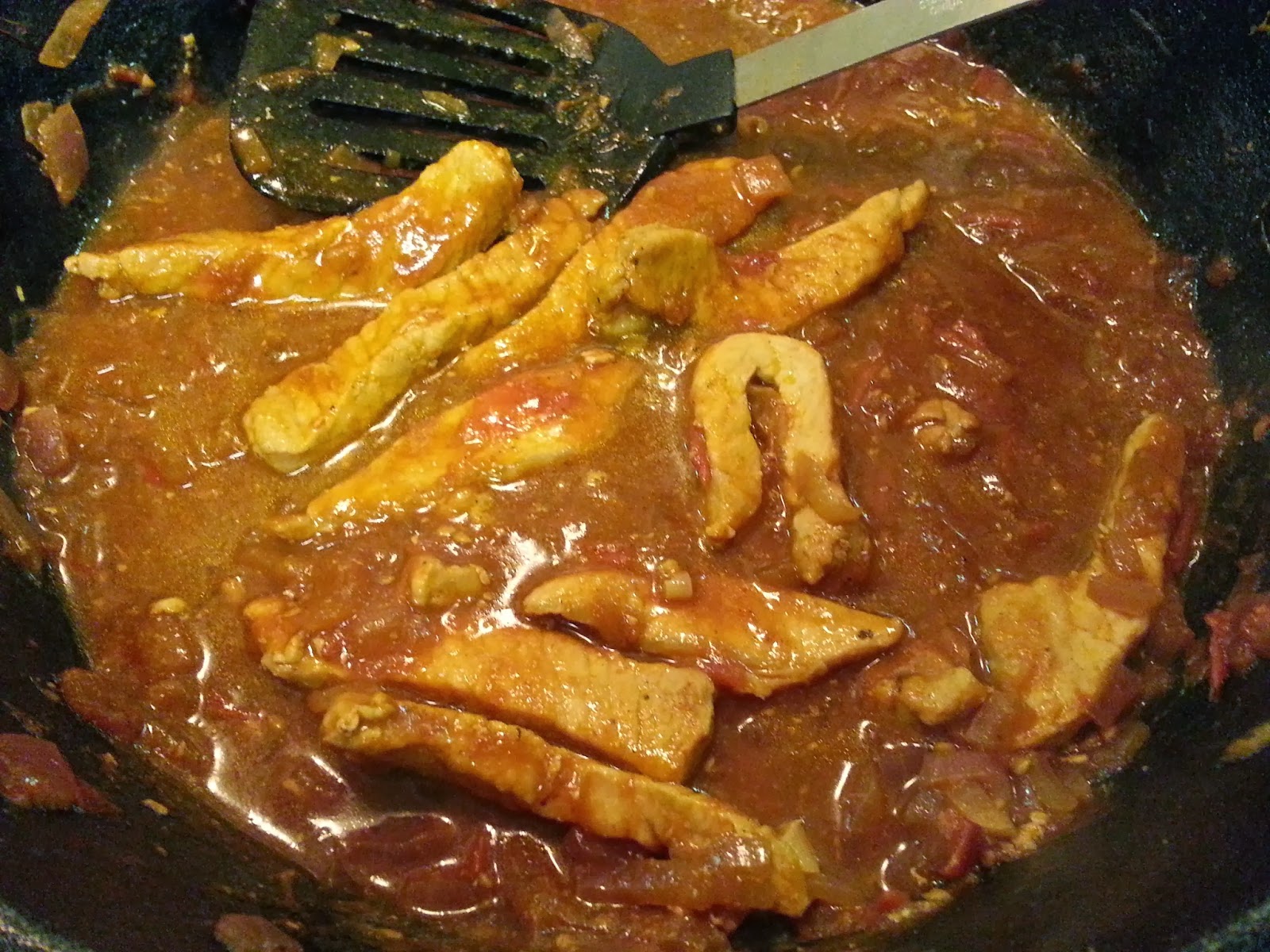 There was actually a lot more pork than what is shown in that picture. This is what was left after we all had taken our first serving. Only downfall was the butter lettuce. I recommend getting lettuce extremely fresh, don't let it start to wilt at all. Also, it needs to have BIG leaves. If not, you won't be able to use the lettuce as taco shells. We ended up making taco salads as you can see in the pics above and below. 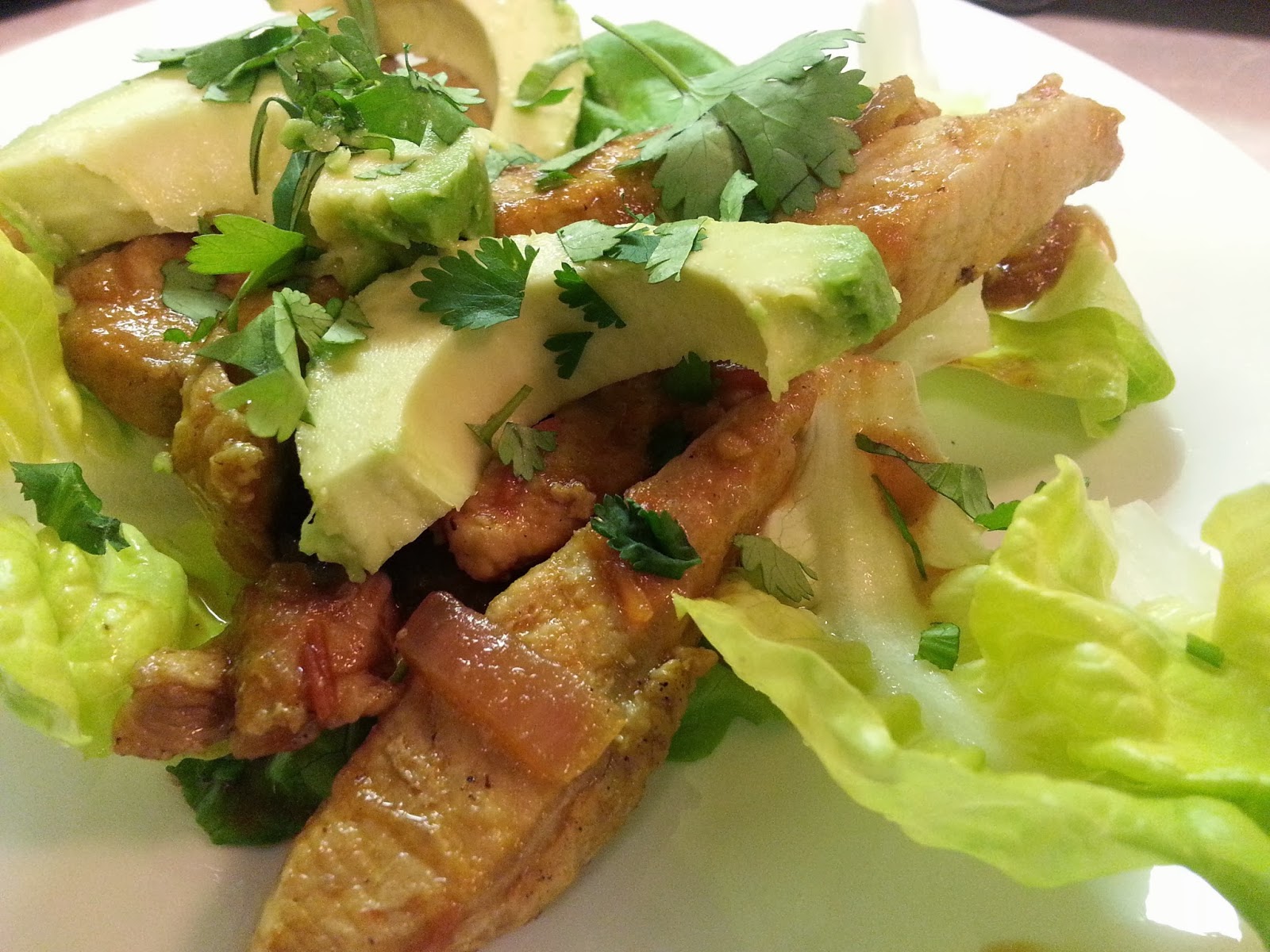 Verdict: Ehhh... I think I would have been happier if I could have made a taco out of this. Don't get me wrong, the flavors were great, but I was a bit disappointed in the execution. That's all on me. I'm seriously upset about the palm oil also, that's also on me. Wish I didn't have all these dumb allergies, but hey, I am who God created me to be. So more adventures will come as I keep on finding new recipes and substitutions!

Posted by Elizabeth at 8:59 PM No comments: 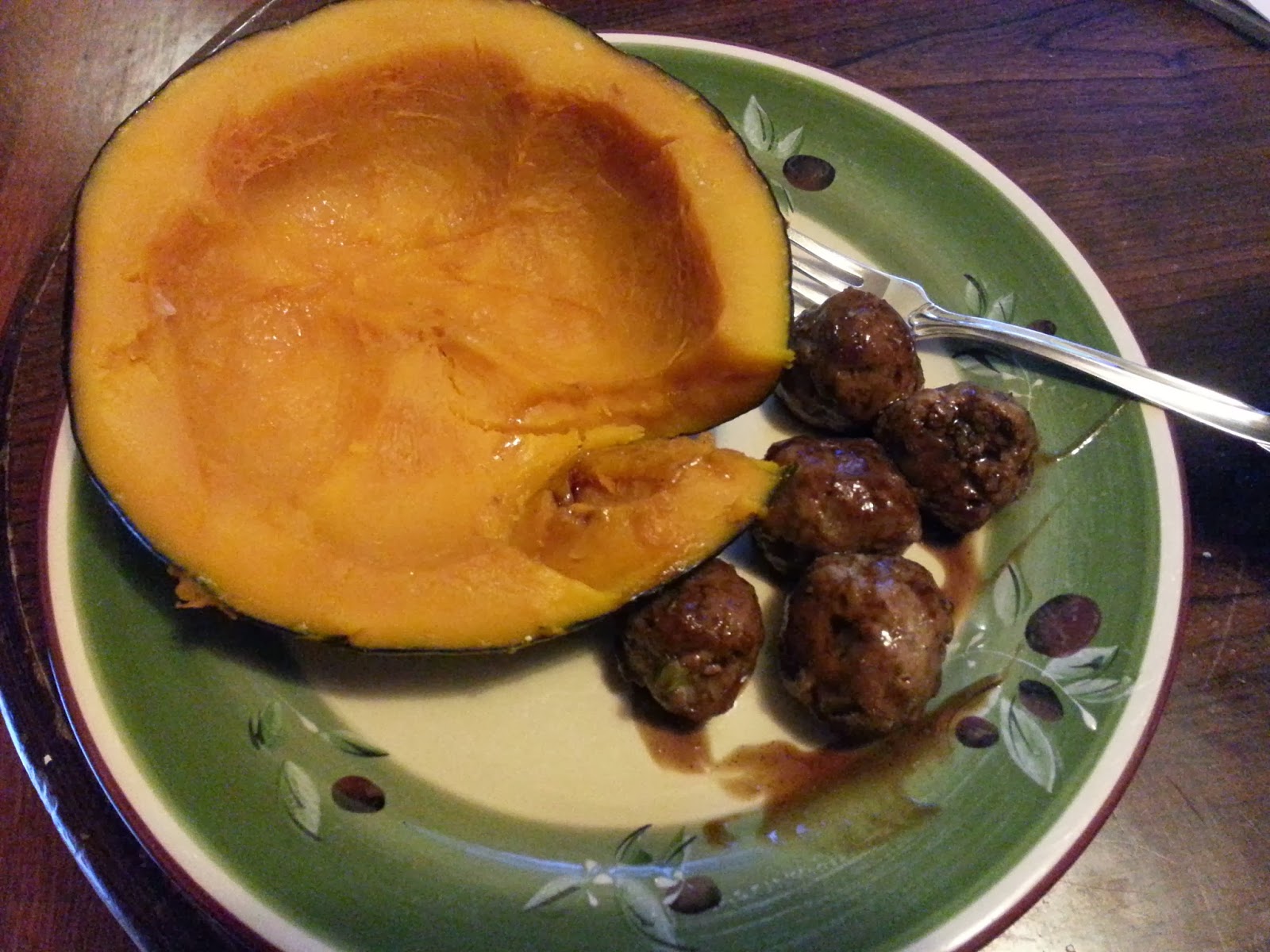 I think I have a new obsession. I want to buy every variation of squash, bake it, and taste the difference in them all. Yesterday I was looking for a side vegetable to go with tonight's Apple Glazed Turkey Meatballs (original recipe found at OAMM) and I spotted the squash in my grocery store. I already had picked up some butternut squash for a lunch recipe, so I thought I would go with acorn squash since we have tried it and liked it. While I was looking at them I saw a different squash, the buttercup squash. It's similar in size to the acorn squash but is a slightly different shape. I picked up two because that's plenty for us for one meal.

I washed the outside of the squash down, preheated my oven to 350 and got a pan out. I sliced the squash in half and removed the seeds and flesh. I placed them cut-side down on the pan and let them roast for 40 minutes. Which was the perfect amount of time for me to prepare the rest of dinner.

The apple glazed turkey meatballs were extremely easy to prepare. 20 minutes to prep and 20 minutes to cook the meatballs. In a bowl I mixed ground turkey, diced apple, 2 cloves of minced garlic, applesauce, sliced green onions, almond flour/meal, sea salt and cinnamon. I used Himalayan sea salt because I'm still in love with the flavor of it.

Now, when I say mix it up, you can't just stick a big spoon in there. No, no, no. Time to get your hands dirty. Ground turkey sticks to everything like there is no tomorrow. It's seriously icky to work with. But if you don't get your hands in there and really work the ingredients in, you'll end up with cinnamon and salt patches that didn't incorporate into the turkey well. You don't want to bite into that.

Time for my PC love. Break out you medium Pampered Chef scoop and form that mess of turkey into meatballs. With the medium scoop I made 20 meatballs out of this recipe. Pop that in a preheated 400 oven and it's time to start the glaze.

In a large skillet (I used my BIG cast iron, but it was a little too big) combine apple juice, ginger (which I forgot but this still tasted great), more applesauce, arrowroot powder, more sea salt and cinnamon, and coconut aminos -- or in my case soy sauce. Yes, I know I ruined the Paleo dinner for us tonight because soy sauce is a no-no on Paleo, but hey, it's either soy sauce or coconut aminos. Little cheat or die of anaphylaxis. hmm... I think I'll cheat.

This is really liquidy when you pour it into the pan, and it's supposed to be a glaze. I whisked it up to break up the arrowroot powder and walked away for a moment to put away the soy sauce and applesauce, came back and it was thick and boiling. That quick it had thickened up. Turn the heat down and let it slowly boil. When the meatballs are finished pop them in the skillet and coat them with the glaze. Serve immediately. 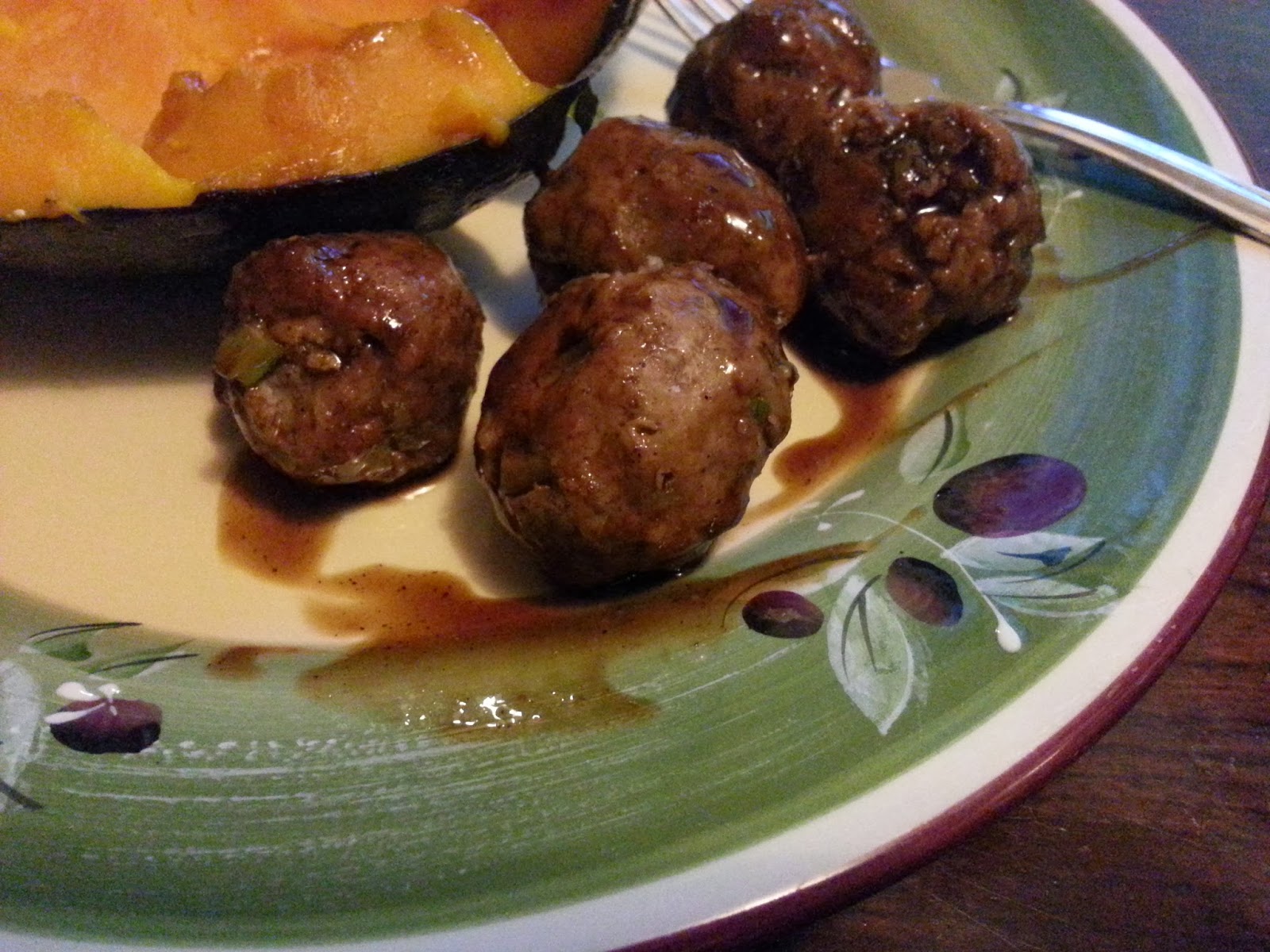 Verdict: The meatballs and glaze were delicious. There were no leftovers. This was an easy meal to throw together and bake. Will definitely make them again. As for the buttercup squash, it was ok. It was more on the savory side rather than the sweeter butternut squash or acorn squash. I think if we had used them as a bowl putting the meatballs with the glaze in them, the squash would have soaked up some of the glaze and made it sweeter. I found a couple of recipes for buttercup squash and they all said to roast like I did, but then cook for 10 minutes more with butter and brown sugar in them. Well, that's not exactly Paleo, so I just wanted to try the full flavor of the squash. I'll do some more research on buttercup squash recipes and maybe I can find something to really utilize the flavor. If you've got one, please share it!

Posted by Elizabeth at 7:47 PM No comments:

My once-a-month cooking friends know how much I love Bird's Nest Pie. It's an awesome go-to meal. Spaghetti, mixed with an egg and Parmesan cheese, spread in a pan. Top that with sour cream that's been mixed with cooked onions, topped with sausage cooked with some sauce. Cover the whole thing in sliced mozzarella cheese and bake it all. Yum!

Spaghetti is something that we love, and spaghetti squash is a perfect substitute. It is super easy to prepare spaghetti squash, so don't let it scare you off! I started by preheating my oven to 400 and I cut the squash in half and placed it cut-side down on a pan. I baked it for about 25-30 minutes until the squash skin was soft. I then took a fork and separated the strands of spaghetti. *Turn the oven down to 350 for later. 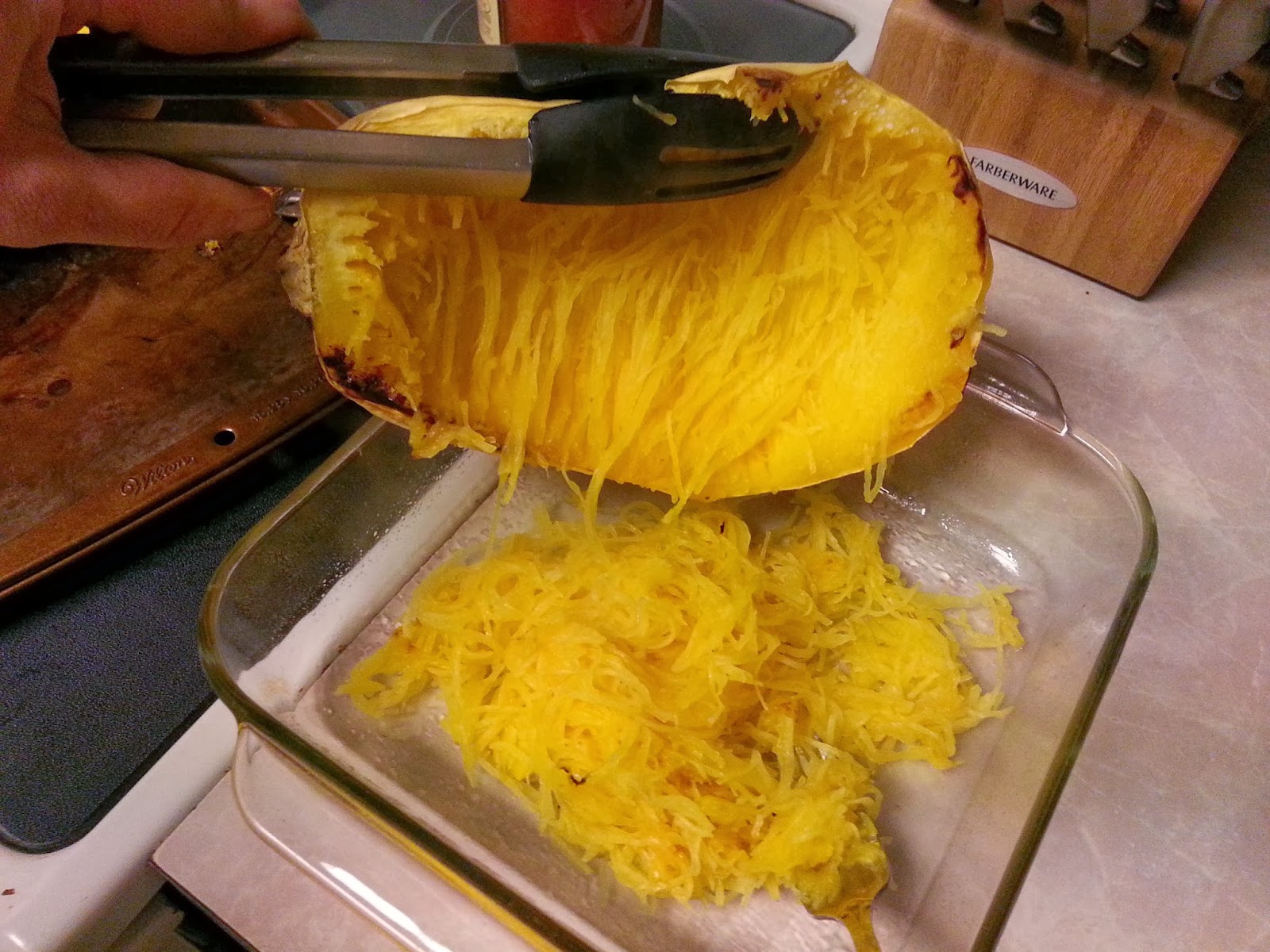 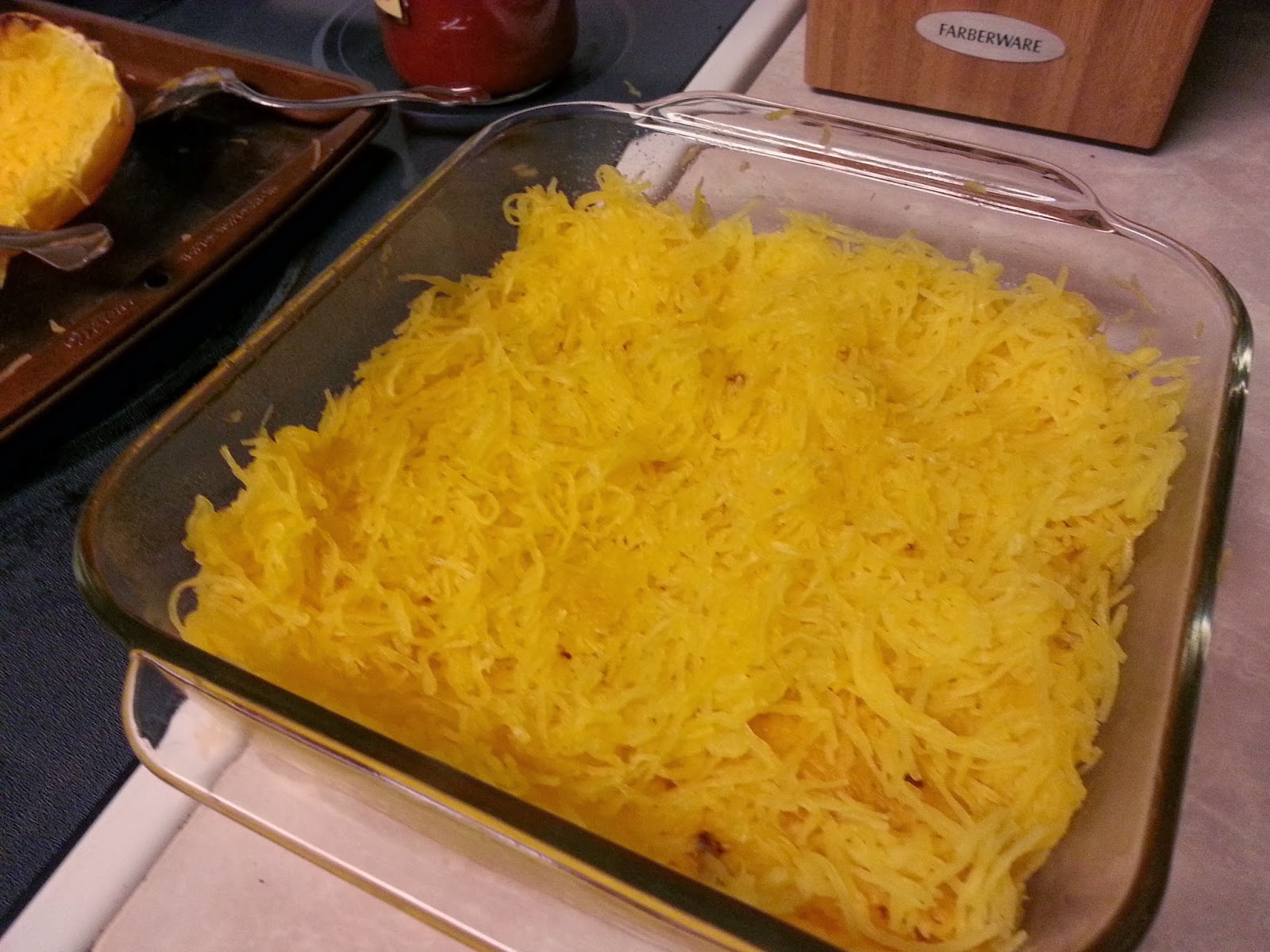 I placed the spaghetti pieces into an 8x8 dish and the dish was half full. That's a lot of spaghetti from one squash! I set the dish aside and started working on the rest of the meal. 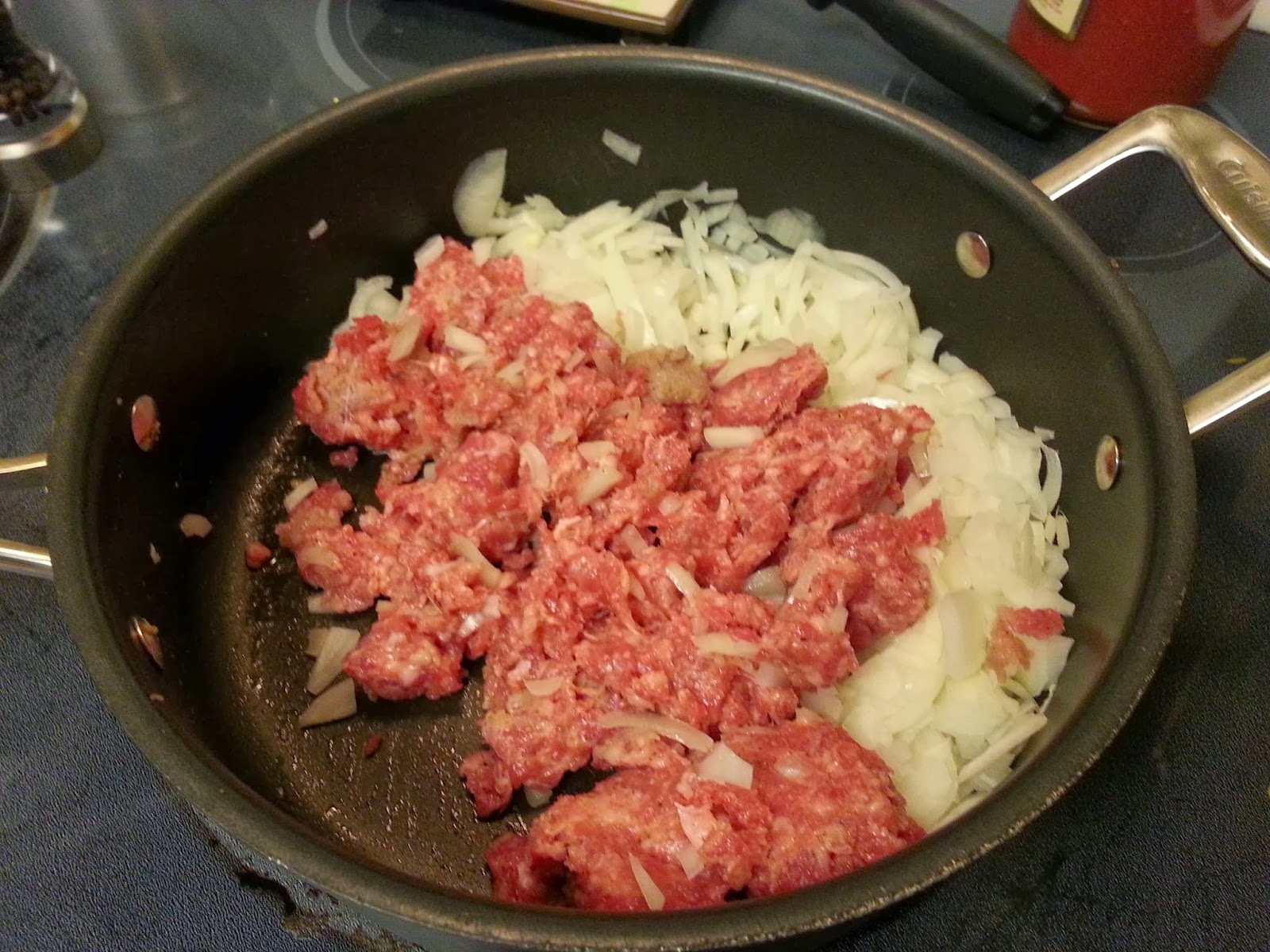 In a pan I cooked a pound of Italian sausage mixed with 1 small chopped onion. After that cooked till the pink was gone, I turned the heat off and added 1 cup of marinara sauce, basil, salt and pepper. I know I was supposed to measure out the basil, salt, and pepper, but I just eyeballed it. Pour that on the spaghetti and mix it up. 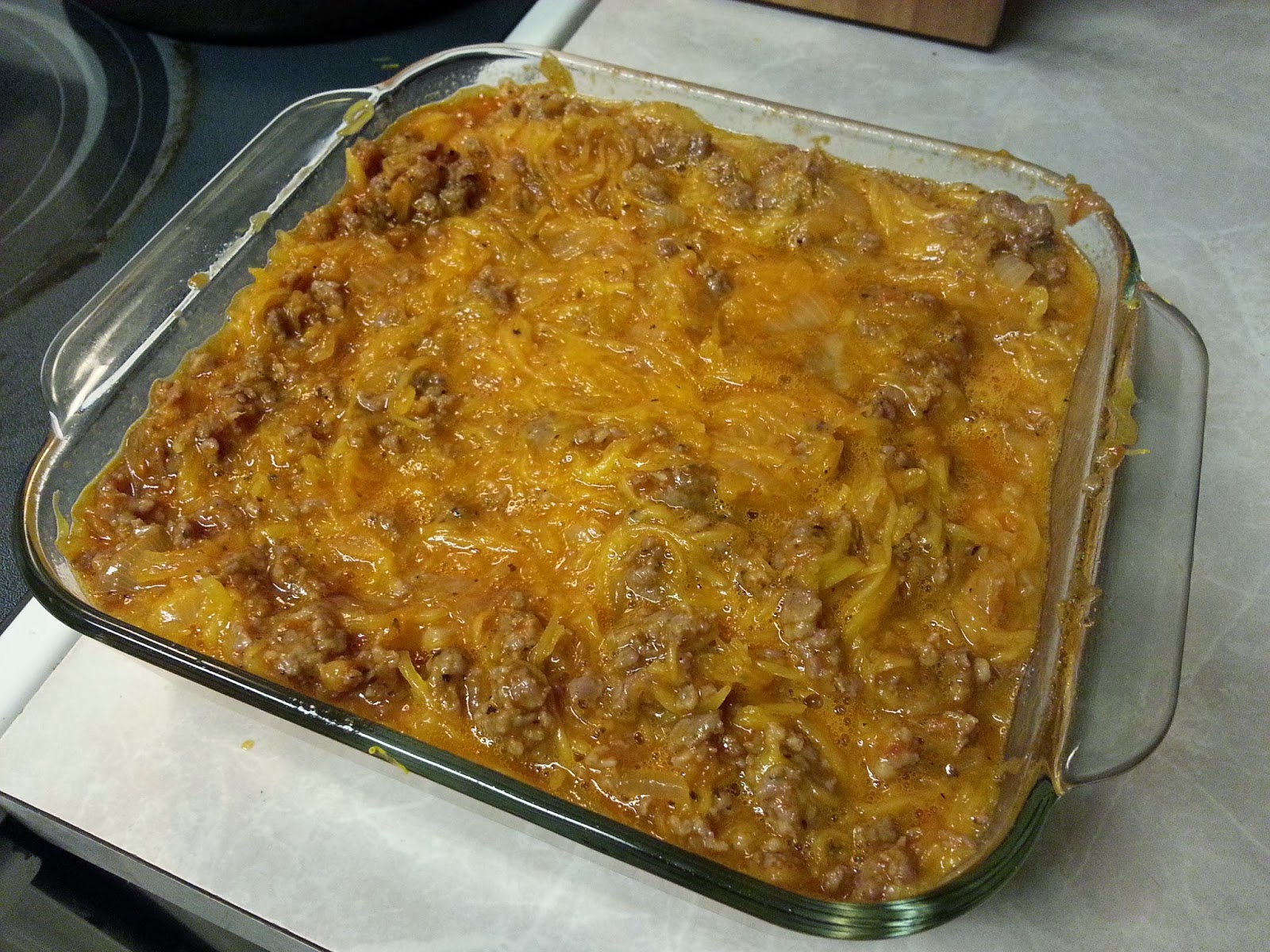 In a small bowl, whisk together 3 eggs then pour it all over the spaghetti mixture. Mix it up so you can't see the egg anymore and it looks like that picture above. Bake it for 55-60 minutes at 350. 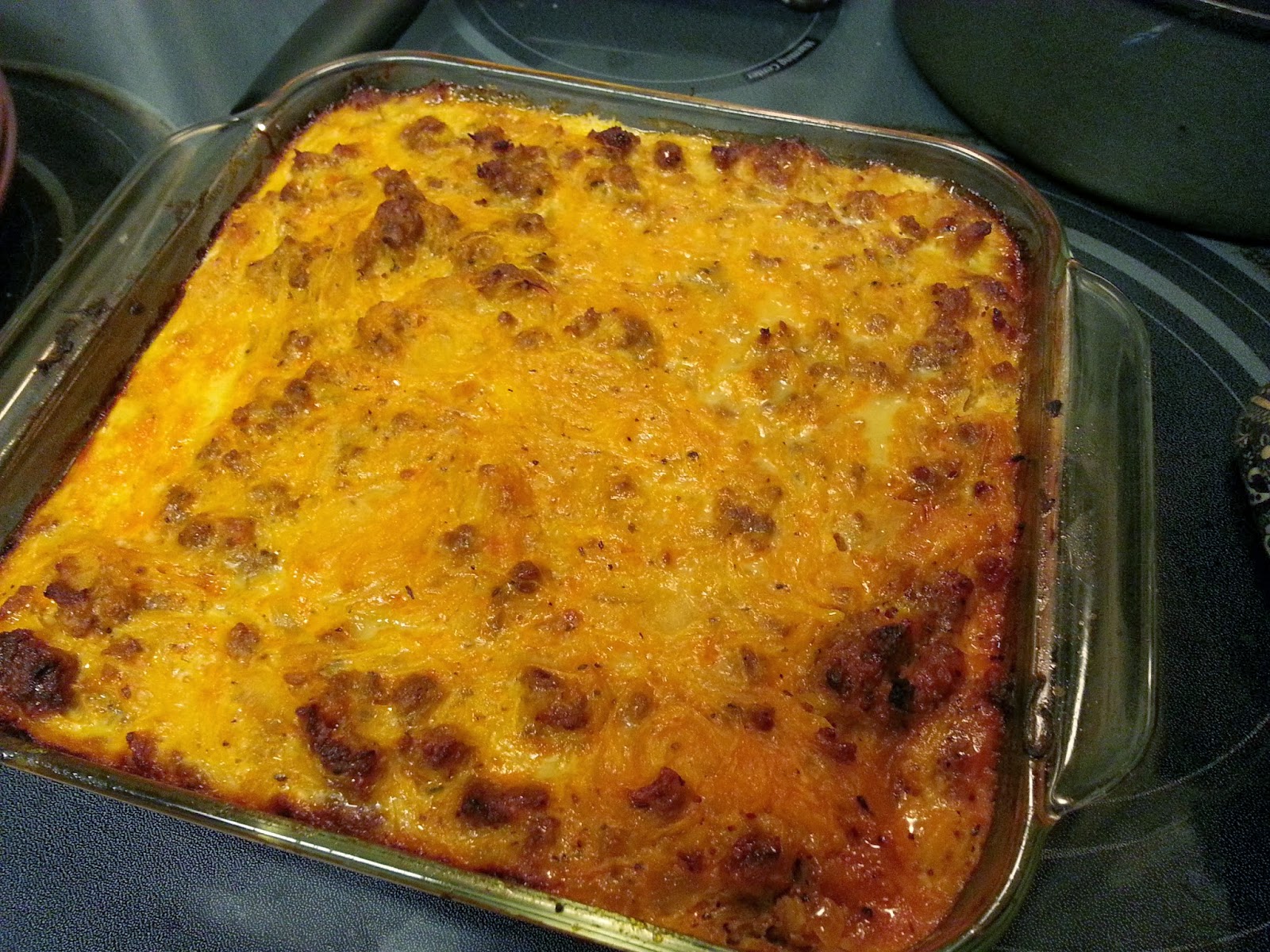 Verdict: Ooh, look at that! Doesn't that look tasty! No cheese and no sour cream, but still full of flavor! My son was complaining all afternoon about why can't we just have spaghetti like normal people. I told him that even if it was cheat day, which it isn't, I can't eat spaghetti anymore because of my gluten intolerance. Gluten free spaghetti doesn't exactly taste great. Well, let me tell you, that boy was raving over this meal. He said it tasted better than the original Bird's Nest Pie! Kid #3 absolutely loved it and my hubby thought it was great. This was a big win meal! 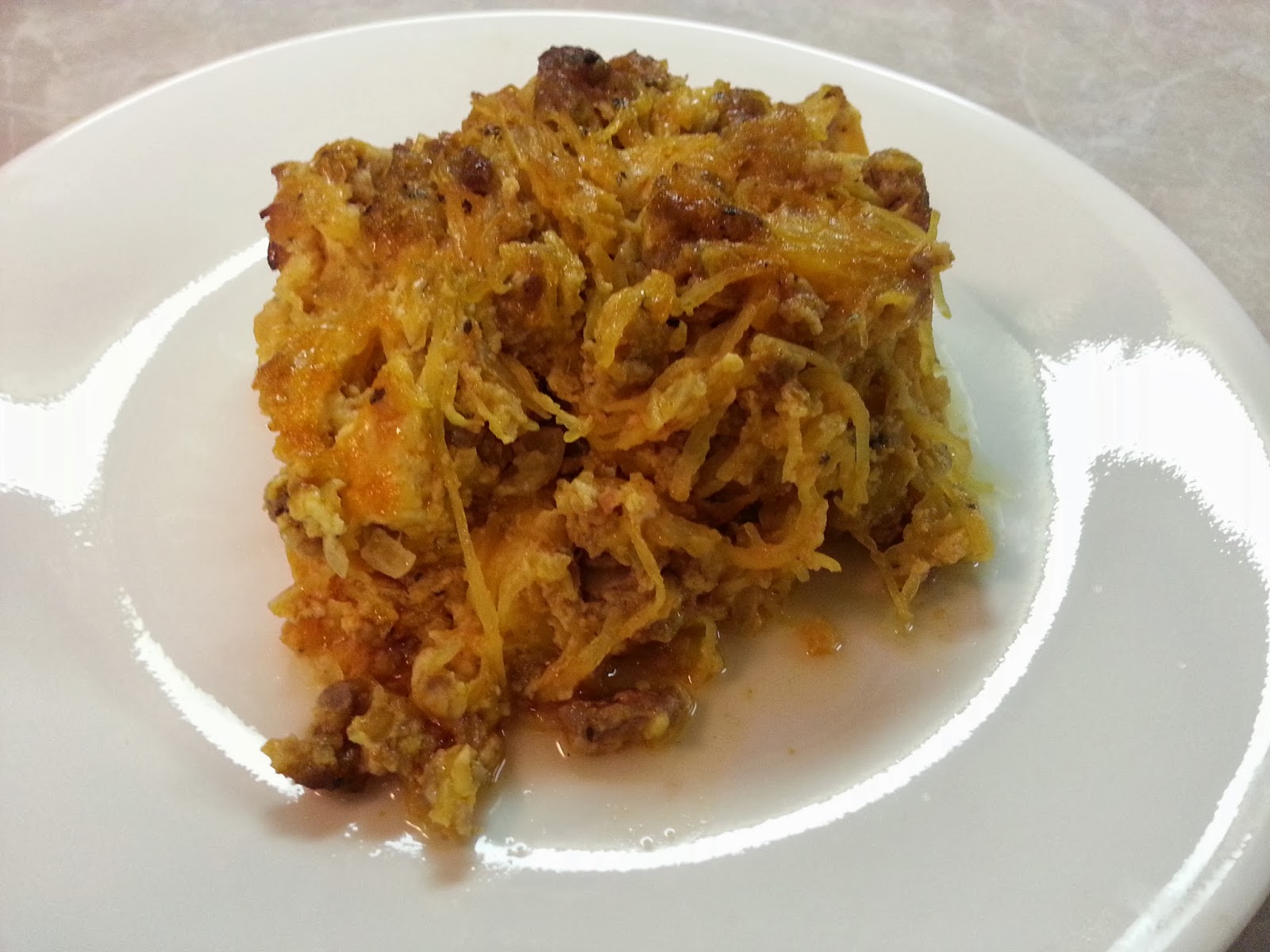 This meal was originally found at PaleOMG.
Posted by Elizabeth at 10:07 PM No comments: 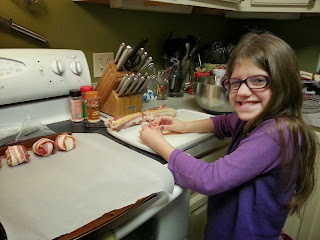 I am supposed to be taking down my Christmas decorations right now. I'm blogging instead. I had a great day at work and just spent a fun time making this dinner with #3. She is a great helper in the kitchen, up until it comes time to put food in the oven. She tends to forget that the oven gets preheated and she reaches in and grabs the oven racks every time we cook. I don't know why she does that. She's now sitting on the couch watching cartoons with an ice cube on her hand. Poor thing.

Tonight's dinner was a yummy find over at PaleOMG. It really was super easy to make, especially since my hubby bought me new knives for Christmas and I was able to cut the butternut squash like it was butter. So happy! 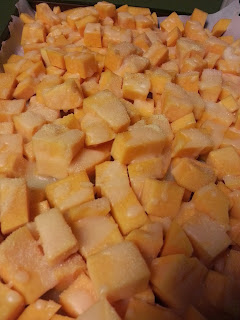 So that squash up there looks a little funny. It's prepped but not cooked yet. Cube a whole medium butternut squash into bite sized pieces and put onto a baking sheet that has a piece of parchment paper on it. Coat with 3 TBSP of melted bacon fat and sprinkle with 1/4 tsp each of garlic powder, onion powder, and sea salt. I used a very large butternut squash and doubled all the rest of the ingredients. I eyeballed the bacon fat so I don't think I used 6 TBSP and I probably could have still just used 3. I also used pink Himalayan sea salt because I have found I love the flavor. It's got a slightly sweeter taste than regular sea salt. At least both my husband and I think so.

Put the pan of prepped squash aside and start on the meatballs. In a large bowl combine 1 pound ground pork, 1/2 onion that has been diced, 2 cloves garlic that is minced, and a little salt and pepper to taste. I used my medium Pampered Chef scoop to make the perfect sized meatballs and this made about 20. The original recipe says it makes only 10, so if you want BIG meatballs and only want to make 10, use the big PC scoop.

Both the meatballs and the squash take 20-30 minutes to cook, so put both pans in the oven and cook at the same time. Mine took closer to the 30 minutes and came out perfectly. 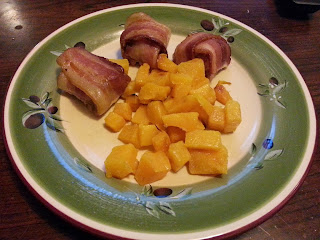 Verdict: This meal is a keeper! If anything, the squash was just delicious. We all loved it. I can't wait to make it again.

Posted by Elizabeth at 9:28 PM No comments:

Elizabeth
Pennsylvania, United States
Seth and Elizabeth were married on March 10, 2000. We are blessed with 3 children, 20, 12, and 9. Our household strives to serve the Lord in all that we do.

If you'd like to leave me a note, send it to itzabitz.blogspot@gmail.com Thanks for visiting my site!